Let me be your guide

Let Me Be Your Tour Guide.

In march 2022 we went to Greece with the let me be your tour guide the Erasmus programme.

Diary one- Monday By Tara Docherty

On Monday we woke up bright and early. We ate breakfast in the hotel, then we walked to the town hall. When we arrived to the town hall the mayor of nakpaftos thought us about the history of nakpaftos. Afterwards we walked to mpotasaris house. Mpotasaris house is an old house , it has paintings from the battle of lepanto. It was interesting learning about the history of nakpaftos. Then we had some lunch. After that we went to the Greek school. When we got there each country presented a power point about each of their countries and they told us about themselves. Then we got put into groups to do some group work and that really helped us bond with the other students. Later on that evening we walked to the Botsari tower, the Botsari tower is a tower ia a tower up at the top of nakpaftos it has a beautiful view. As much as the walk was tiring the amazing view at the top was worth it! In the late evening we had some dinner then we got ready for the roof top party at the top of the hotel. We really enjoyed the party and we became good friends with all the other students. It was a very fun first day- Tara Docherty

On Tuesday morning we woke up bright and early. We headed to breakfast then afterwards went down stairs to get the bus to delphi. When we got off the bus in delphi we had lunch, we got rolls and juice boxes. At the archiolecal site we got headphones so we could here everything that the worker was saying. We learned all about the history of delphi. We learned that 80% of the ruins were found and they were able to rebuild most of the temples. On our way home from delphi we stopped off for luch in the mountains. We tried some new foods and it was really nice. We stayed in a little town for an hour called Arachova . we got on the bus to go home and we got to know the greeks a bit more. When we got back we got crepes then went back to the hotel to go to bed.

On Wednesday we got up at 9;30am , we met outside our hotel and Athena put us in groups we had to walk up the mountain while doing a tressure hunt on an app called goose chase. On the way up the mountain we had to go to different locations and take photographs and upload them to the app. At the top of the mountain there was a castle called the venetarian castle of nakpaftos. Up at the castle we learned how to fly a drone with micheal the Greek teacher. We all got a shot of the drove individually. After we flew the drone we walked back down the mountain and went for lunch with everyone doing the Erasmus. After lunch we got put into new groups for a new task, in our new groups we got half an hour to take pictures of the nakpaftos port. When we were finished taking the photographs Athena brought us back to the school that we were in on Monday we went to the computer room. In the computer room we used the pictures to make an advertisement for nakpaftos. Then we went back to the hotel and went to bed after a long day.- Emily greene

On Thursday we woke up at eight o clock. We went down to the buffay in the hotel to get breakfast then we met all of the other groups outside the hotel and got a bus to the port. We got the boat over to patris. When we got to patris we went to a collage and went to a design room and other classrooms in the college. We then went to a mosque. Before we had to go in we had to cover up. It was a part of the mosque rule. After the mosque we went and got lunch and went shopping around patris. When we got back to nakpaftos we got ready to go to the farewell dinner the farewell dinner was a dinner to celebrate the end og the Erasmus trip. At the dinner we got shown a video of all the pictures and videos of the week. Then everyone got awards and certificates. After the dinner we went to bed. – Hollie O’Hanlon

On Friday at 8:45 am we were set to leave nakpaftos we had packed our bags the night before. We got on a coach to Athens, we stopped at a liabrary, we got a tour, we learned many facts including how the library has over 705000 books. After the tour we were dropped off to the city centre. We went to visit the acropolis museum. At the muesuem we learned lots about ancient Greece. After the muesuem we said bye to all the friends we made on the trip. We got the metro to our hotel. We were very tired so we had an early night. Overall the trip was amazing and I met so many new people. I would defiantly do it again. – Abi O’Neill 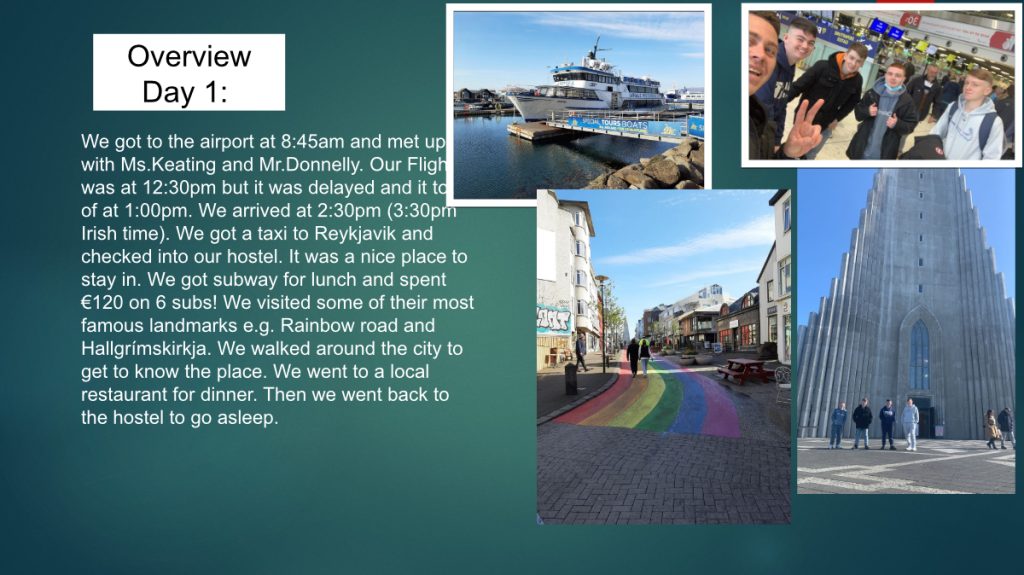